This post is the third in a series I’m writing about our tornado experience. You can read from the beginning with the first post here.

To begin, my apologies for taking so long with this third post. The second post was hard. Reliving the storm and moments afterward. Examining our reactions. Much of it is still a bit of a blur. We are now three months out from that day and I still experience the terror of those moments occasionally.

It has been triggered by spring storms, by loud noises, by small enclosed places. The terror isn’t debilitating, but it sometimes it just takes the breath away and leaves a queasy, uneasy, unsafe feeling.

But I digress! I’ve had so many people asking, “What happened next?” So we’ll start where we left off: 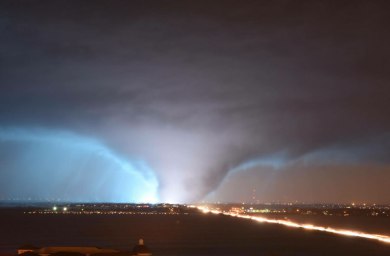 I’m standing in front of our rubble. Can’t sit down because there are nails and bits and pieces of stuff everywhere. My phone is dead. It has been drizzling off and on. The sounds are still very weird. Not normal neighborhood sounds at 10pm at night. No hum of air conditioners and electronics. It is mainly sounds of debris being moved, or crunched as cars slowly wind their way through the streets. The sounds of people talking and crying. Some yells and calls for assistance. A distant cacophony of sirens.

I’m nervous for my husband as he goes in and out of the house retrieving what he can – it is so hard to tell the extent of the damage and I don’t want him hurt. My car isn’t going anywhere. My beloved Mini Cooper has a large section of roof decking through the sunroof. My husband’s car (a Ford Flexx) has broken windows and dents, but looks like it will drive so he is loading whatever he can in the back.

I see a man walk up the sidewalk. It is my sister’s friend! He has worked emergencies before and has a calm head about him! He is parked about a mile away at a local elementary school – it was the closest he could get but he is ready to help us to my sister’s. He helps clear debris from around and under the car and goes in with my husband to check on/get Spike. Spike is our very large pit-mix puppy. I had put him in the laundry room just before the tornado hit but we were nervous about getting him out of there with all the debris everywhere.

Our wonderful savior picked Spike up and carried him to my husband’s car. He was shaken up and stressed, but otherwise unharmed – the laundry room was intact even through the room directly above was pretty much gone.

So Spike was safely ensconced in the back of the vehicle, and I go next door to get the kids. The plan is for my husband to try and get out of the neighborhood in the car with Spike, and the kids and I will walk over to the elementary school where my sister’s friend is parked.

I check on our other next door neighbor and she said they aren’t leaving their house that night – they are worried about looters. My husband and I decide we can’t worry about that – we need to get the kids out of this war-zone and we’ll come back in the morning.

We are ready to set off when my husband looks at me and says, “the steak!”

I’m sure I must’ve given him a look like what in the world are you talking about?!?

Remember that $120 uncut filet I mentioned my husband was so excited about? He had bought it earlier that day.

He says, “We can’t leave the steak! It’ll spoil – it was a hundred and twenty dollars!”

Me: “Well we can’t put it in the car with poor Spike – he is freaked out enough as it is!”

So my husband goes in and grabs this 2 foot long piece of meat. My daughter and I are carrying bags of stuff already and my sister’s friend has picked up my youngest so he doesn’t have to walk. My husband turns to my middle son, Tucker, who is 11 and says, “Tucker you are going to have to carry the steak!”

Let’s just say this didn’t go over well, but Tucker acquiesces, and my husband gets in the car with a frantic dog and pulls away.

My motley crew starts off down the street. We are walking in the middle of the street, climbing over wood and trees and fence posts and household items. All the while Tucker is complaining loudly about having to carry the steak:

And my favorite: “I think it’s bleeding on me!”

We got quite a few weird glances as we picked our way through the neighborhood.

We made it to his vehicle, piled in and wound our way out through a logjam of traffic. My husband has made it out of the neighborhood as well. There are police cars from neighboring communities and traffic heading into the neighborhood is at a complete standstill.

We get to my sister’s across town pretty quickly. They are still without power but we are SO glad to be there. We are exhausted, mentally spent and long overdue a bathroom break.

We borrow clothes and I gulp a glass of wine.

The past few hours felt both tremendously short and incredibly long and we are all sort of like walking zombies.

We had no idea what daylight would bring, but for the moment we are safe.

And we saved the steak!

Stay tuned for the next part of the story…how the rainstorm finished off what the tornado left, how a city reacts and waking up without a stitch of clothing to your name…

Mom. Wife. Salesforce Administrator/Developer. Employee. Volunteer. Friend. Artist. Craftswoman. Passionate about my kids and their future! I am a Salesforce MVP. For more information on the Salesforce MVP community, visit: http://www.salesforce.com/mvp/ . Salesforce, Force, Force.com, Chatter, and others are trademarks of salesforce.com, inc. and are used here with permission.
View all posts by Nana →
This entry was posted in Quirky Stuff, The Joy of Parenting and tagged Community, Family, Humor, Parenting, Rowlett, Tornado. Bookmark the permalink.

Welcome to the USA

Ramblings from a Salesforce Business Analyst

Jill of all trades and [certified in] some

Wings Like Eagles in the Desert: A Journey through the Wilderness of Chronic Illness

An Odyssey of Life Off the Beaten Path

Blogging about philosophy in various forms including: Individualism, Existentialism, Buddhism, and Stoicism

My adventures with Salesforce, Mobile and Life

Journey from Adam to Architect

The future is already here – it's just not evenly distributed.

It's better to give than to receive.

Where the Venn Diagram of Nerd Culture and Salesforce Admins meet.

"It was love at first login!"

Tips and tricks from a Salesforce MVP and Nonprofit Salesforce Admin, with a pinch of salt

Building apps on the Salesforce Lightning and Android Platforms